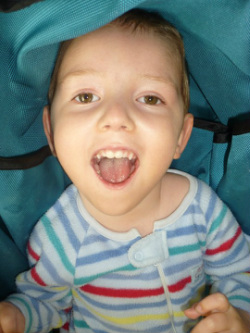 Owen was born on the 08/06/08 weighing 8lb 8oz i thought Owen was just like any other normal baby, it was all fine until he was around 6 months old when his grandma noticed his head was a bit flat at the back, i didn't really fuss over it but told the health visitor who told me to see my GP, the GP then referred my to a consultant, by this time Owen was 8 months old and it was noticeable that he wasn't making progress how he should be for his age, the consultant didn't seem to concern until we went back 3 month later when Owen was 11 months old, the consultant then began to question things and thought it was best for some tests to be done just for the safe side.

Since Owen has being born he has had so many test, 4 MRI and CT scans,  blood tests, chomozone test and DNA test's, urine test, hearing test, ECG, EEG, lumber puncture, skin and muscle biopsy, all of Owens tests have either come back negative or have shown something, since owen was 2 they have suspected it eing mitochondrial disese but cannot diagnose it due to negative results.


Owen's also had lots of operation's for lot's of different reason's, but no operation Owen has is taken lightly and i look at all possibilities before contemplating an operation, because the more operation's Owen has, the weaker it makes him afterwards.

Owen is 6 years old but is more like a 3 month old he cannot hold his head up, sit, walk, talk, eat or drink,  Owen does have a short attention span, he also is not aware of much, and i do not even know if he understand's anything, owen's eyesight is unknown, i know Owen can see something, but from tests and consultation's were not sure what, it may but full vision, but his consultants think it's unlikely and more likely, that it may be vivid, colors, or it may just be shapes.


if you saw him you may think he looked older, most people that don't know Owen think he looks like a 8-9 year old, which is good in a way because it never used to be like that, and he used to be so underweight that you could see his heart beating through his skin, he had an operation in march 2012 to stop him from being sick and it's made all the difference, which is fantastic.


owen's condition is terminal, i know this because of his brain scan's, over the years the owen's brain wasn't much different but within a year owen's brain shrunk nearly 50%, which is why know i know he may go anytime, and it may be very quickly.
the slightest bug could make Owen very unwell or he may just stop breathing, there's even possibility's of of any of owen's organ's just stopping working.


it's very difficult to think about Owen not being here because i cannot imagine it, and it is wrong that these thing's happen in life, so i try and stay positive, he always full of smiles, he is getting ill more frequent but i have a good network of family, friends and doctor's around me if i need help .
Owen does need 27/7 care with every single aspect of his life, but he also enjoy a little bit of normality by going to a special school which he loves, he loves his bus journeys there and back, he enjoy's swimming at school, massage, going in th sensory room and of course lot's of attention, he also enjoys going to respite and having sleepover's and especially enjoy's having sleepover's at grandma's house for one next every other week, and loves his auntie Bethany playing with him, she look's after him really well considering sh's only 6 years old also, as there's only 8 month's between them both x